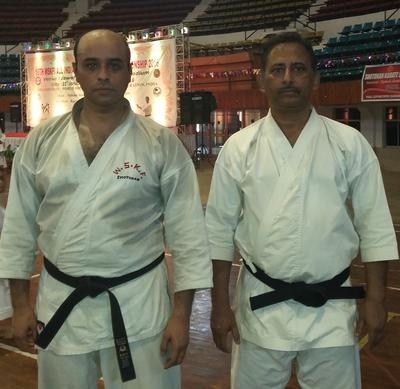 Shihan Sattrajit Chaudhury, 8th Dan is a legend in martial arts in India. With a karate career spanning more than 46 years, he has an unending list of achievements in karate – from being all styles National Champion to bagging the top honours in WSKF World Karate Championships. Shihan Chaudhury started his training of Shotokan Karate in the early seventies under Sensei Anil Sinha (former JKA India Chairman and senior-most Shotokan karate Master in India), who first introduced Shotokan Karate in India He is WTSKF Chief Instructor leading a team of several Black Belt instructors, with thousands of karateka practising in more than 24 states in India and international branches. WTSKF is an affiliate member of WTKO.

This interview was conducted by Arijit Chakraborty 6th Dan , WTSKF, on the sidelines of the WTSKF National Karate Championships, 2016.

AC - Ossu Shihan, it is my pleasure to conduct this interview. Please share your illustrious karate career highlights, this will inspire our WMA readers.
SC - I started Karate at YMCA Kolkata in the early 1970’s under Sensei Anil Sinha. The training was tough and intense by today’s standards and very few students made it to Black Belt. I passed JKA Shodan in the early 1980’s and continued harder training, passing my JKA Nidan and Sandan. I was glad to receive Best Fighting Spirit Award at the A.I.K.F. National Championship. I was Captain of the West Bengal team for consecutive 7 years. In WSKF Japan, I graded to 6th Dan Black Belt. I was a Bronze Medallist in Kata & Kumite at the W.S.K.F. World Championship (above 40 years) in 2004. I was awarded "Best Instructor award" by WSKF Head Quarters JAPAN. As an International Referee, Examiner and Instructor and Judge - Asian Karate Do Federation (Kata & Kumite), it is my endeavour to promote traditional Karate.

AC - Shihan, please let the readers know about WTSKF.
SC - We formed the World Traditional Shotokan Karate Federation (WTSKF) to pursue the path of scientific study, and disciplined practise of Shotokan Karate – both from the ‘Budo’ perspective and also from the sports karate angle. WTSKF is one of the fastest growing Karate Organization in India. We have overseas branches and a senior group of black belt instructors who are technically sound and committed.

AC - Shihan, please share your unique interpretation of Karate-Do.
SC - Karate Do or the way of Karate is significantly different from "Karate". One may be surprised to hear this, but it is true. Karate as practiced nowadays is mainly for fun, sport or for pure entertainment and proficiency can be achieved relatively easily, but to understand "Do", requires a lifelong dedicated effort. When I started practicing karate in the early seventies the movements were simple but stronger. Every time we were told to aim for kime (focus) in techniques, putting full concentrated power and energy behind each decisive technique was the motive. But the priority has changed now. Techniques are more fluid and a lot of fancy or attractive techniques are used but kime is somehow missing in them. In "Budo" (the martial way) one needs to have a strong technique. The practitioner should have a "Life and death" situation in mind, not a "touch and go" situation as used in competition. The priority of today's karateka is tournament and they prepare for tournaments throughout the year, thus risking neglecting the 'do' aspect of Karate. In karate the most important maxim is 'Ikken Hissastu' (to finish your enemy with one blow). This requires the need for the decisiveness and commitment in an attack. You have to put your whole being in your punch or kick or even in a block.

AC - Shihan, kindly enlighten us on the mental aspect in traditional Karate.
SC - Penetrating technique in Karate is possible only if one trains the whole mind and body with utmost seriousness. In martial arts there is a word 'Fudoshin'. Fudoshin means to have indomitable but a calm mind in all situations. Karateka must train with the attitude that whether you lose or win, your mind should be stable. Kime not only requires focus of physical power but also requires to be focused mentally all the time. Kime of the technique is applied only at the last instance of the completion of the technique but this also requires 'kime' of the mind throughout the moment. This point has to be understood. The term 'Ichigo ichi e' comes from Japanese tea ceremony but it is important in martial arts also. It means 'one time one meeting'. It represents the uniqueness of each movement and importance of each encounter. This state of mind can be achieved if a karateka is focused mentally and physically. It is good to understand that to be focused does not mean to be tensed but rather to be aware. Thousands and thousands of repetitions are required to achieve some sort of perfection in a technique and a karateka should have the attitude to accept the pain of this long going journey. Even after decades of practice one should have the attitude of a beginner. A good karateka should never be satisfied with their present level of expertise.

AC - Shihan ,please advise on the spiritual and psychological aspects vital for Karate students and instructors.
SC - Karate is an endless journey. Live this moment with intensity otherwise karate moments will only become a good exercise. It will not be martial arts. Tournament is only a small part of karate. It is like fast food. You do not live on fast food but you can enjoy it occasionally but for all around development you should have proper nutritious food. Similarly enjoy competitions occasionally but do not live for them otherwise your karate will be finished once your competition career is over, your main focus should be to have effective karate. This will give you real confidence and not a superficial confidence. Build up a very strong base as this will build an indomitable spirit. Another important point to be remembered is not to look for appreciation from others. You should concentrate on your own karate, whether people appreciate it or not. You should practice for your own mental and physical development. In this journey if somebody appreciates you then you have the liberty to feel good but if you do not get that, that is also fine. This is correct martial spirit. If you are dedicated then that is enough. You then have a good chance to achieve your goal. Remember you have only one life but countless moments. In this ways everybody is rich in life. Enjoy the moments and train hard with kime.

AC - Shihan, our gratitude. Regards and thanks for inspiring us with your deep interpretations and advice. Wishing you and WTSKF all success.

Copyright © 2010-22 dynamic-karate.com All rights reserved. No reproduction without permission.