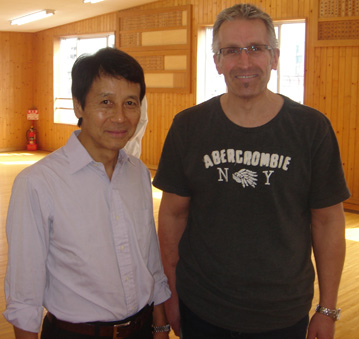 I had heard that Kawazoe Masao Sensei was "back with JKA" which sounds ridiculous - as if he'd been on some kind of forced absence or retirement or worse - as if he'd actually stopped training..!

Well, any 'lifer' can spot another and I knew nearly 4 decades ago that this man with the gift of near flawless Karate, would be punching and kicking all of his life. How could he not..?

I worked out that when he first came to our Dojo in Scotland, he would have been just 28 years old. Most of those 28 years were spent amongst a generation of peers and mentors that are now considered the vanguard of modern Japanese Karate.

Fast forward to the Nihon Karate Kyokai Sohonbu joint Autumn International Training Camp in Tokyo Japan October 2011. (BTW, I have lived and trained in Australia for 30 years while Sensei continued to live and train in the UK). I join the senior (by rank) class for the first of 7 sessions over 3 days and, in a Dojo filled with more big names than I care to recount, I spot Kawazoe Sensei quietly preparing for Keiko like everyone else.

After the first class, in which I noticed he was extemely relaxed but powering through better than anyone, I made my way toward him and re-introduced myself in Japanese. He thought for a minute before declaring that he remembered me..!

Over the weekend in the various classes I partnered Sensei a lot, especially in Kumite drills - and there were no allowances made for 'old times sake'. He was in magnificent shape and moving like the wind - Fresh as a Daisy at 66 years of age.

Of all my trips to Japan this one is a stand out. To catch up with Kawazoe Sensei after all this time and to partner him at training - SUGOI DESU NE.