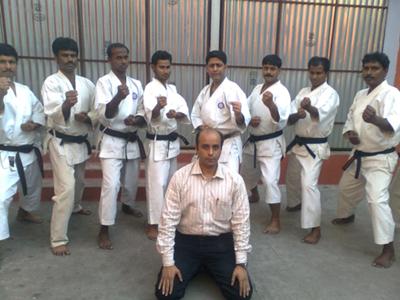 The Indian Federation of Shotokan Karate (IFSK), an affiliated body of SKDUN and FBSKU (England) organised a Workshop on standardizing kihon, kata and kumite for IFSK Members on the lines of JKA Karate -do as propagated by the Late Nakayama Sensei.

Kata Heian 1-5, Tekki Shodan, Bassai Dai & Gankaku were practised, analysed and Enbu was also taught. The objective is to attain uniformity and convergence of technical training in all IFSK Dojos.

IFSK has more than 20 Dojos with more than 700 students in West Bengal and Eastern India. It is recognised by AIKF and is a main-line Shotokan organisation. Sensei Palchowdhury started karate-do in 1983 and has trained under Sensei Nishiyama, Kase, Shirai, Kawasoe, Naito, Kanazawa and other great Masters. He is a 'core' traditionalist' and believes in 'ikken hissatsu', the JKA way of Karate-do. He also drills in Shobu Ippon as his favourite.